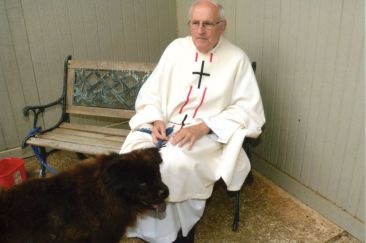 “All good things must come to an end!”

That saying captures the feelings of the St. Bede’s Episcopal Church flock after the Rev. Canon John C. Powers announced plans for retirement, with his last day in official capacity at the Westport church to be Sunday, August 6.

In his honor, members plan a buffet style dinner in Parish Hall, following the Sunday morning service. All former members and friends of the church are invited. The church will also be saying goodbye to Kathy Powers, his daughter.

On the following Sunday (Aug. 15) the Rev. Bill Carroll, assistant to the bishop, Oklahoma City, will be at St. Bede’s at 10 a.m. to preach. Following the service, he will meet in Parish Hall with members to talk about St. Bede’s future ministry and mission.

Although retiring from pastoral duties, Father Powers most unlikely will be found whittling sticks or TV-grazing to mark time. He’s the type who believes in “filling the unforgiving minute with 60 seconds worth of distance run.” And that type doesn’t sit still long.

Born in Tulsa, December 21, 1936 to a staunch Episcopalian family, his forbearers include another Episcopal priest. Active in Tulsa Trinity Episcopal Church, he was with the group touring Episcopal missions in Mexico in his teens. He graduated from OU as a history and government major, then in August of that year he and Betsy Jane, his wife, were married. The following year he did his military stint as a second lieutenant with the Army military police. Philip Carter Powers, first of his three children, arrived in 1961, followed by daughter Kathy (Kathryn Alice) in late 1962 and John Charles in 1966.

He was awarded his Master of Divinity degree from Genera Theology Seminary in New York City in 1962. One Sunday when a local member missed church because her pan of divinity, made the evening before, failed to set and she was remaking it, he sent word that she should come anyway, since he was a master of divinity.

Father Powers led a tour of the Holy Land in 1966. He had previously led a Youth tour to the Anglican Congress in Toronto in 1963. He pursued additional education pertaining to his calling at the College of Preachers, National Cathedral, Washington, D.C. 1968-’70, the Conference on Parish Planning 1969 and a Course on Basic and Advanced Human Relations in 1969.

In 1974, he was recipient of the James Mills Diocesan Fellowship for a year of study overseas and took it at Cambridge University, Cambridge, England. He was president of the Tulsa Ministerial Alliance in 1987, was on the board of Tulsa Metropolitan Ministry from 1984 to present, a board member of the National Conference of Christians and Jews from 1979 to present and on the board of the Association of Episcopal Colleges from 1987 to present.

Able to converse in Spanish was a plus when he served in the Summer Supply of Chapals, Mexico in 1982 and at Florence Italy in 1989. A past president of the Retired Episcopal Priests Association in the Tulsa area, he occasionally held their meetings at St. Bede’s.

The first Episcopal church he was sent to serve was at Idabel. During his 55-year ministry he has served five parishes. The first was St. Luke’s in Langston 1962-68. The Langston Holy Family church and Langston University chaplain were added 1964-68. During those same years (1964-74) he was rector at St. Mary’s church in Edmond and Central State University chaplain 1964-68.

In 1975 he became assistant rector at Tulsa Trinity Episcopal. Two years later he was named rector at Trinity.

In 1991 he retired from Trinity to accept work in the Episcopal Headquarters in New York City. Two years later he was named executive vice-president of the Episcopal College was made general secretary of colleges and universities of the Anglican Communion. His position entailed supervising the day-to-day operations of this world wide organization’s 104 institutions with a historic or present relationship to the Anglican community. He administered projects such as student and faculty exchange student service and study opportunities abroad and the enhancement of the Anglican heritage of the CUAC members.

When his wife Betsy became ill in 2000, he returned to Tulsa and accepted the part time job of serving the small country congregation nearby. Betsy died in February 2003.