Known as the Father of English History. How did he come to gain that title?

Who Was the Venerable Bede?

The Venerable Bede – also known as St Bede – is widely regarded as the greatest of all the Anglo-Saxon scholars. He lived and died in between the twin monasteries of Wearmouth and Jarrow in the North East of England between 673 and 735 AD and wrote or translated some forty books on practically every area of knowledge, including nature, astronomy, and poetry. He also wrote the first martyrology (a chronicle about the lives of the saints).

However, his most famous writing was on theology and history and his best known work is The Ecclesiastical History of the English People.

Why Was the Venerable Bede Important?

Although Bede was a polymath and religious figure who described himself as having “devoted [his] energies to the study of the scriptures, observing monastic discipline, and singing the daily services in church” and for whom “study, teaching, and writing had always been [his] delight", he is remembered today as the earliest English historian, whose work has shed light on a period of English history that would have otherwise been unknown.

He is often referred to as ‘The Father of English History.’

What was Bede's Association with Durham

The Venerable Bede’s bones have been in Durham Cathedral since 1022. They were brought from Jarrow by a monk called Alfred who had them buried alongside Cuthbert’s relics, where they remained until they were moved to the Cathedral’s Galilee Chapel in the 14th century.

Why is Bede called the 'Venerable'?

In fact, ‘the Venerable Bede’ comes from the Latin inscription on Bede’s tomb in Durham Cathedral, reading: 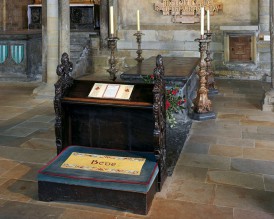 What is the Story of Bede’s Life?

Bede was widely regarded as the foremost scholar in Europe during his life, and continues to inspire people theologically and intellectually to this day.

Born in 672, Bede began his monastic training at the newly-founded Benedictine monastery of St Peter in Wearmouth at the age of seven. When he had completed this schooling, he moved to the twin monastery of St Paul in nearby Jarrow, where he remained for the rest of his life. It is probable that he never travelled further afield than Lindisfarne to the north and York to the south during his lifetime.

Bede declined to become the prior of Jarrow because he did not want administrative duties that would take him away from his scholarship.He continued working until the very end of his life. His last work was a translation of the Gospel of St John, which he dictated to a young assistant:

'Dear master, there is still one sentence that we have not written down.'

After a little while the boy said, 'There, now it is written.'

'You have said well,' replied Bede. 'It is at an end. All is finished.'

From “Venerable” to Sainthood