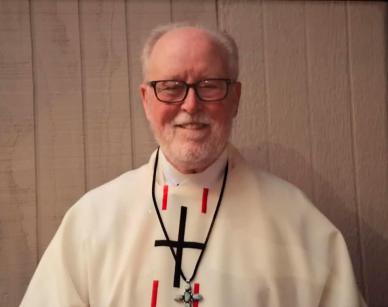 The Rev. Dr. Lee Stephens, otherwise known as “Fr. Lee,” became the part time Vicar of St. Bede’s January 1, 2021.  He had been serving as a supply priest twice a month for most of the previous year when asked to be the Vicar.  Fr. Lee retired from St. Luke’s Episcopal Church in Bartlesville after serving as Rector for twenty years.  He went on to serve as priest in charge at St. Peter’s in Tulsa as the church made the transition to a Spanish-speaking congregation.  Retirement from full time ministry is required at 72, but he is enjoying the extension of his calling as a priest.

Fr. Lee grew up on the north side of Tulsa where he attended Tulsa Central High School and belonged to Osage Hills Baptist Church – now Gilcrease Hills Baptist Church.  In the summer of 1961 when he was 16, he had a mystical experience of God’s calling him to the ministry.  This was affirmed by his family, friends and church and became his life calling.  This set him on a path to attend Oklahoma Baptist University where the spiritual dissonance of his childhood continued to be a challenge.  After six years he graduated and went on to the then progressive seminary in Kansas City, Midwestern Baptist Theological Seminary, where he earned his Master of Divinity and Doctor of Ministry degrees.  Fr. Lee served as a Baptist pastor for twenty-two years in Atlanta, Georgia and Kansas City, Missouri.

In 1991 Fr. Lee made the transition to the Episcopal Church which surprised no one who knew him.  He attended the Anglican School of Theology in Dallas, Texas as he took a position at Christ Church in Tyler, Texas.  After six years he was called to be the Rector at St. Luke’s in Bartlesville.

As a pastor and priest, especially at St. Luke’s, Fr. Lee has sought to bring attention to and action on behalf of the marginalized and poor in the community.  This is seen in his leadership and personal involvement with Bridges Out of Poverty, Getting Ahead, Family Promise, Agape Mission, Green Country Free Clinic, the Transportation Coalition and other ministry efforts.

In the Diocese of Oklahoma, he has served on the Diocesan Council and been Dean of the Northeast Region.  He has served on eleven Cursillo teams and held two terms on the Secretariat.  During his tenure at St. Luke’s, he mentored six Curates and three Deacons.  Over the years he has taken special studies on spirituality and contemplative prayer.  In his desire to share and further explore a deeper spirituality he has led special studies in spirituality and spiritual disciplines.  This included spiritual direction for parishioners and clergy.

Fr. Lee’s wife, Lynda, is retired as a piano professor from universities in Tyler and Bartlesville.  They have three sons who live in the Kansas City area.  They also have grown twin grandchildren, Lauren and Cayden, along with younger grandchildren, Savannah and Landon.  Lynda and Lee continue to live in Bartlesville which is about an hour from St. Bede’s.